Through innovative and creative solutions, Nox improves the quality of mobile experiences while offering advertisers the perfect platform to reach new target audiences. With their suite of cutting-edge apps, they’ve been reaching over 1 billion users worldwide since 2015.

Their breakthrough success in China, Japan, and South Korea was with NoxPlayer, an Android emulator which allows access to mobile games on PC and Mac. By 2018, they were ready to move on to app development, releasing the NoxCleaner and NoxSecurity apps to help boost device speed and improve security. To this day, they remain at the top of the Asian tool app rankings.

An Experienced Partner to Trust and Rely On

Nox had solidified its place in multiple key markets, and their apps provided the perfect platform for monetization through advertisements. Even though their goal of scaling their company up by tenfold was in sight, they were facing substantial bottlenecks to their growth. This was particularly apparent when they looked to expand into the Southeast Asian (SEA) market. They searched for a partner that they could trust, who also had the knowledge and experience to succeed in the region. After successfully collaborating with Pangle for Japan and South Korea through the gaming side of their business, Nox knew they could rely on Pangle once again when it came to their non-gaming tools apps.

Non-gaming apps often require a very diverse and specific variety of ad to be shown for effective monetization when compared to mobile games. Users of tools apps, for example, may prefer to see advertisements from e-commerce companies, video streaming platforms, or other social apps as opposed to just gaming ads, driving higher conversion rates and eCPMs

Pangle, thanks to exclusive access to the vastly diverse ad demand from TikTok For Business, was the perfect partner to help in monetizing Nox s non-gaming tools apps.

Unlike gaming apps which often use a rewarded video format, cleaner apps like NoxCleaner are opened at semi-regular intervals to boost the performance of phones, so very little time is spent in the app itself. Interstitial ads were placed after the app performed a clean, while banner ads were strategically placed in empty spaces on screens that showed how much the app had cleaned. This meant that the impact of the ads on user experience was minimized, and therefore very effective at reaching a wide range of target audiences. 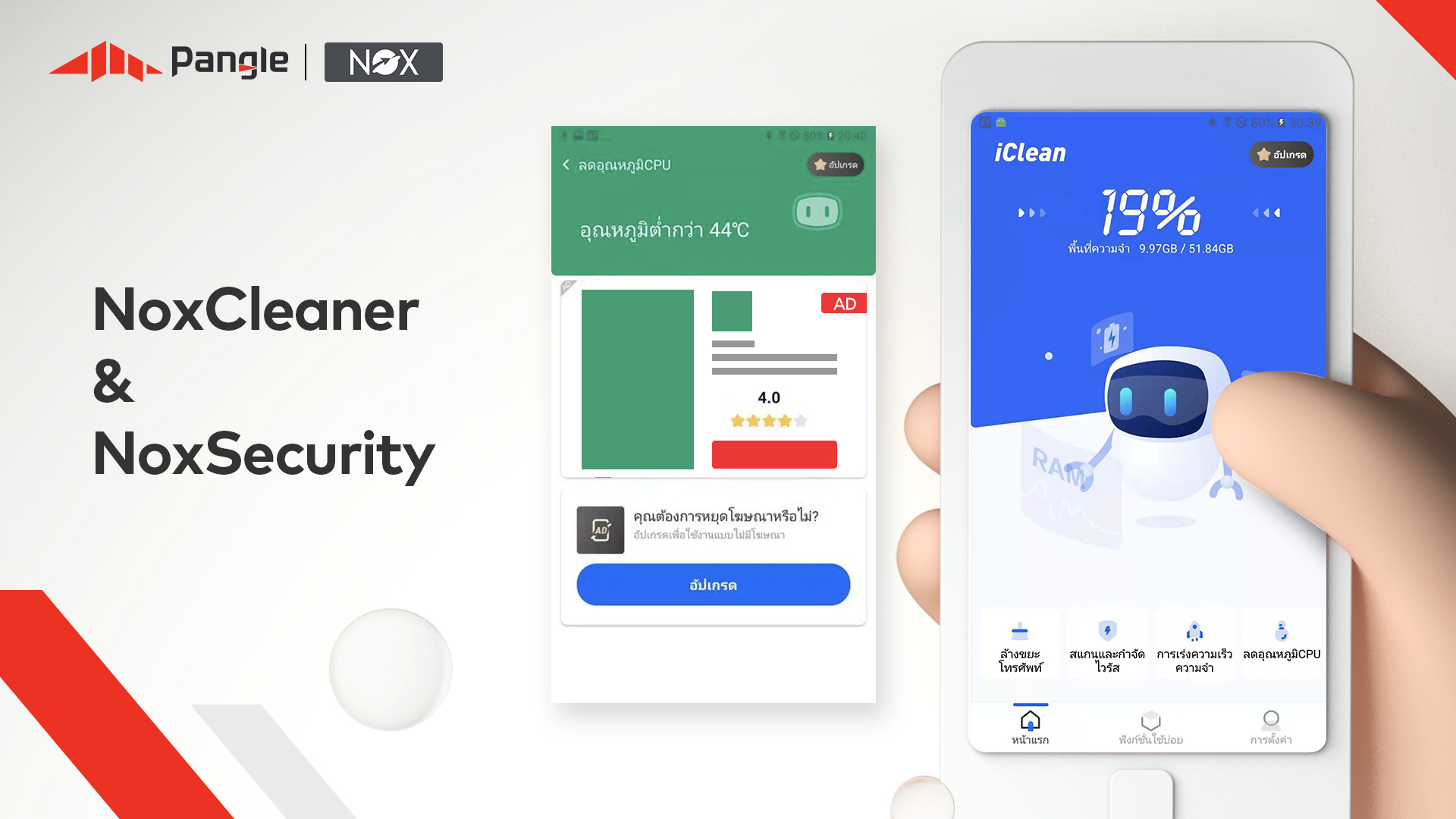 These advertisement strategies led to Nox obtaining excellent monetization results in the SEA market, which was further enhanced through Pangle’s technology that assisted in scaling and fine-tuning their effectiveness. The reduction in required human resources for Nox allowed them to channel their resources into exploring new products and expanding company scale. Pangle directly helped by: Pangle s Advantage: A Huge Ad Demand To Leverage and Monetize from

With the rapidly growing mobile industry in SEA, e-commerce companies are leading the pack in leveraging Pangle s app network to reach their target audience. Conveniently, with tens of billions of ad requests every month and highly matching traffic, Nox tools apps offer the ideal platform to invest on and convert users.

In addition, the majority of Nox users are between the ages of 35-55—a segment that has higher purchasing power when compared to others. Acquiring this segment is key for e-commerce companies, meaning higher ad budgets spent on these apps. The result? Higher eCPMs for app publishers like Nox.

Pangle helped Nox to better access this demand while at the same time matching advertising companies with their target audience, creating a win-win-win scenario.

Securing a Brighter (and Cleaner) Future Together

Nox’s expansion into the SEA region has proved to be fruitful, thanks to the partnership with Pangle. Looking forward, Nox hopes to increase their SOV in the region and take on competitors, leading to higher revenue and breaking the current limits on their growth.

“The 15% growth in Pangle’s SOV (Share of Voice) for us certainly contributed in increasing our ARPU by 10%. Having established a relationship with Pangle based on trust, Nox expects to see a rising percentage of our revenue being contributed by Pangle moving forward. As we further expand our range of services, we’ll continue to collaborate with Pangle to help successfully monetize other mobile apps that we develop in the future.”