In the world of Android and iOS gaming, competitive advertising and a focused user acquisition (UA) strategy are vital for ensuring a new title hits the ground running, even when you’re a developer as widely recognizable as FT Games.

FT Games has seen over 100 million game downloads, and its games regularly feature in the U.S. Play Store’s Top 10 list — all of which contributed to them earning Google Play’s coveted Top World Developer award in 2015.

That s why Pangle was so excited to be working with FT Games to launch their latest entry in the Zombie Frontier franchise, Zombie Frontier 4. Working together, Pangle quickly rolled out a strategy to boost UA and in-app purchases (IAPs) and ramp up the revenue on their latest zombie-themed offering.

A key challenge for FT Games has been the increasing cost of user acquisition, which naturally cuts into their bottom line. Having seen Pangle’s success in other cases, FT Games elected to partner with us, specifically in the Asia-Pacific (APAC) region.

Their initial goals were simple:

1. Raise awareness of the new title.

Of course, an important factor was achieving these goals at the best possible price. For FT Games, this meant lowering cost per install (CPI) and cost per purchase (CPP) while still running a highly competitive ad campaign.

A Meticulous Approach to A/B Testing

Besides generally being pros at developing robust ad strategies, one of FT Games’ strengths is their meticulous approach to testing.

For Zombie Frontier 4, FT Games set its sights on determining which factors were crucial for boosting the number of downloads and in-app purchases. With Pangle’s support, the FT Games team put their ad options through a rigorous selection process. Their goal was to get to the heart of what would drive the results they needed.

FT Games considered different ad placements, measuring the results of TikTok placement versus Pangle placement. It became apparent that running a campaign that combined TikTok and Pangle saw higher reach, and more importantly, better CPA efficiency. They also tested a campaign with a dedicated solution for the new limitations imposed by iOS 14.5 versus a non-iOS 14.5 campaign.

Targeting the right user market was given equal consideration. FT Games was able to narrow down the best traffic targets for their offering by testing different audience packages.

Another crucial test was advertising performance when a campaign used App Event Optimization (AEO) solution versus one without it. With AEO, an advertiser can select a particular in-app event that has value for their business and direct their advertising towards users most likely to fulfill that event. So, for example, if user retention is a goal for the app, AEO can ensure that ads are getting seen by the types of users a particular game is likely to retain. For Zombie Frontier, the value-add was having users who would convert via in-app purchases.

During testing, the Pangle team worked closely with FT Games, acting as consultants throughout the campaign. With long-standing expertise in targeting strategies, Pangle could guide the process of exploring and refining the perfect strategy for Zombie Frontier.

Taking things a step further, FT Games also wanted to get the best possible CPI while optimizing for IAPs. At this point, Pangle’s AEO-autobid feature took center stage. Using AEO-autobid, both conditions could be met. New users were acquired at an optimal CPI while the campaign simultaneously met other goals, like increasing IAPs.

Based on experience with similar campaigns in the past, the Pangle team could also offer advice on the optimal number of ad creatives and when to rotate ad creatives based on their performance. This is an important part of successfully boosting user acquisition, particularly when there are other optimization goals in the mix as well.

A/B testing confirmed that Pangle’s AEO-autobid feature worked perfectly for the campaign, boosting IAPs and reducing CPI as expected. The results speak for themselves.

- 3.8x improvement in ad competitiveness compared to campaigns without AEO-autobid. 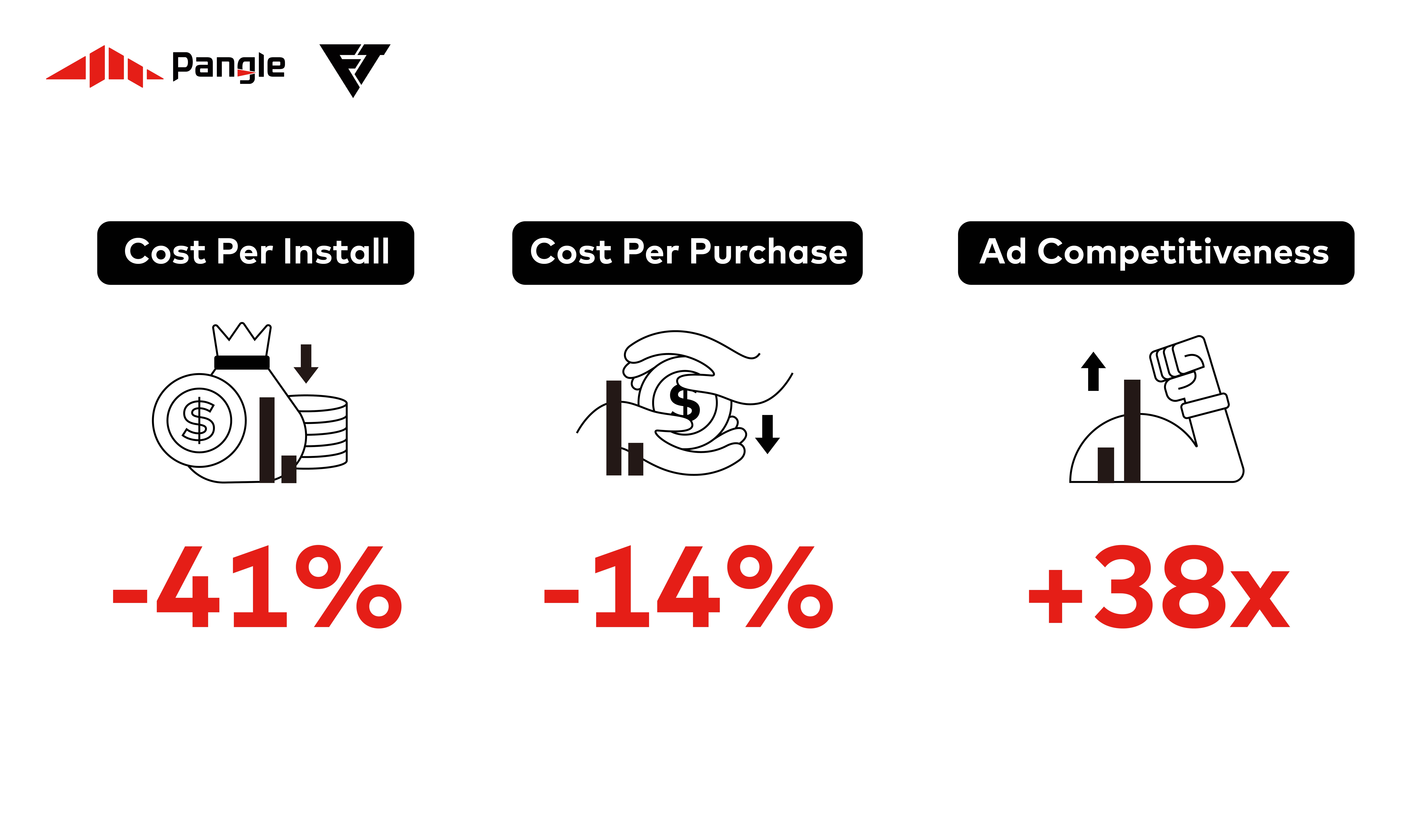 These figures translate into a higher return on investment (ROI) for FT Games and a proven partnership both companies plan on carrying into the future.

A Solutions-Based Approach to the Future

By partnering with Pangle, FT Games was able to see incredible results that helped to secure a successful launch, dropping the CPI by 41%, and utilizing Pangle s expertise to give them the edge to continue their dominance in the App market.