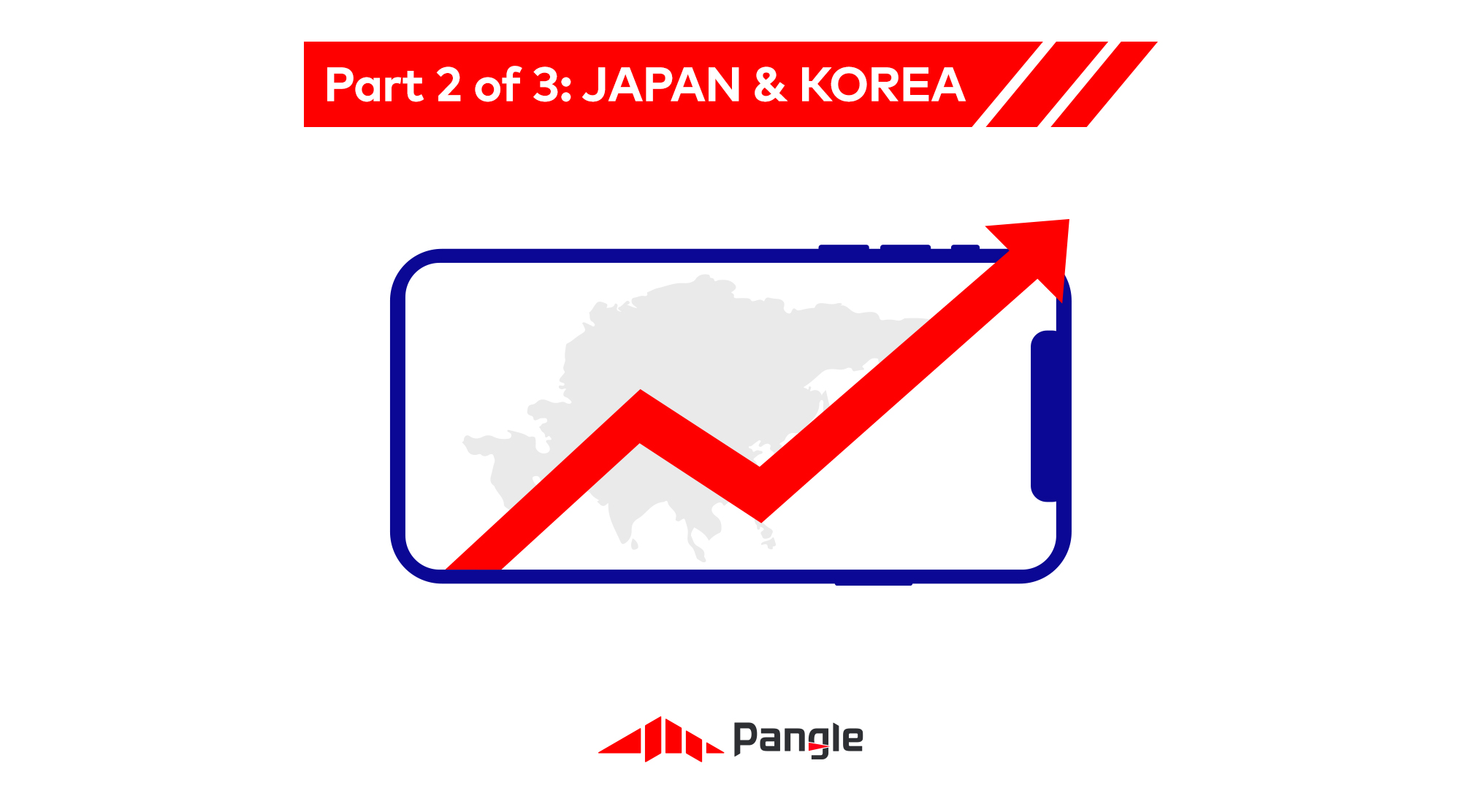 Now that we've looked at when to target the largest market in the world, we turn to China's neighboring countries of Japan and Korea. When are the biggest celebrations? Are the same marketing and ad monetization strategies used in China also effective in Japan and Korea? Are they as approachable as China? We answer these questions and more in this installment of our three-part series.

With Japan's strong ties to video games, manga, and anime, the entertainment sector is more interconnected than you might find elsewhere. Companies within these industries will often interact with each other across multiple mediums at once. Especially during holidays, they will follow the same strategies to acquire new users.

Indeed, these periods are a great time to maximize ad spend in Japan, as work bonuses are handed out and many are expected to travel home, greatly increasing your monetization capabilities and the effects of your ad campaigns. 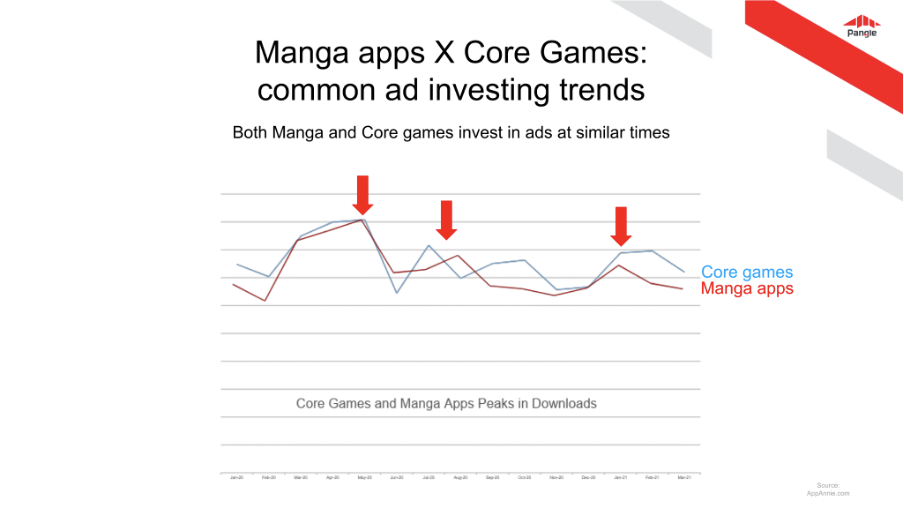 More than it Meets the Eye

As one of the biggest industries in the country, reading manga novels often represents a daily activity for the Japanese population (Ajpea). Being the train the most popular means of transportation, users have plenty of spare time to spend on their phones while traveling from work or school each day. Many take the opportunity to read a chapter or two of their favorite manga, and digital manga apps have an incredibly high open rate.

Knowing this, many core games developers found great success by placing their ads in manga apps, leveraging the similarities between the two audiences and capitalizing on the high number of impressions to guide players back to their app.

In Japan, New Year's celebrations begin on December 31, and usually last for five days. Many shops close during this period, leaving many to pass the time on their phones while stuck at home. Both manga apps and core games developers take advantage of the otherwise rarely-stationary population by increasing their advertisement budget and drive as many installs as possible through their ad campaigns. Another point to keep in mind is that at this time of year the working class can typically expect winter bonuses for holiday expenses, meaning many will have a little extra disposable income to spend on your game. 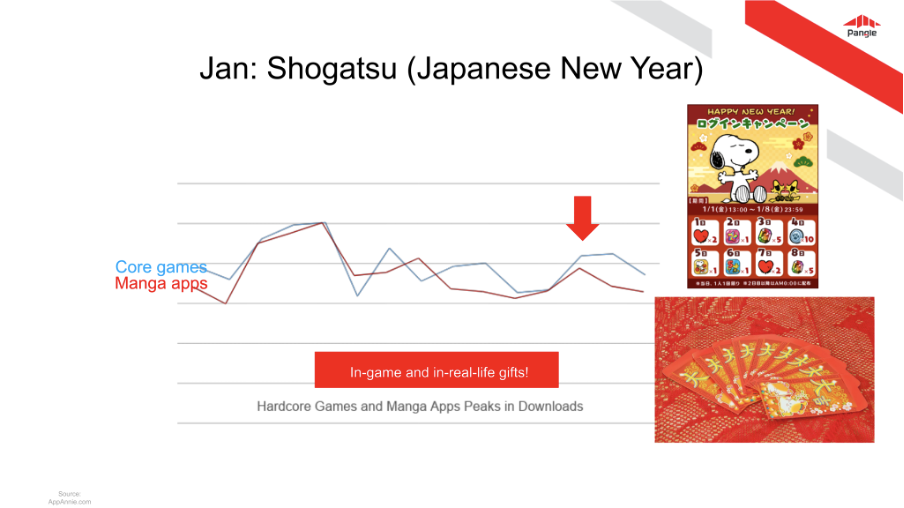 The spring holiday begins at the start of February and ends with the start of April, while the summer holiday begins in late June and ends in late August. College students are given significant time off during these periods, lending them more time to invest into their games and manga apps. It is suggested to increase marketing efforts during these times, often leading to increased user acquisition, and spending.

Golden Week is a string of Japanese holidays that usually starts at the end of April and lasts approximately one week. Most of the Japanese population relaxes during this long break, and every industry offers sales to boost income. Many manga and game release dates are scheduled for Golden Week, as people have more time to spend with their favorite titles and discover the newest world the entertainment industry has to offer. Research data has shown that teenagers in particular spend more time on games during Golden Week than usual in 2021 (Famitsu). 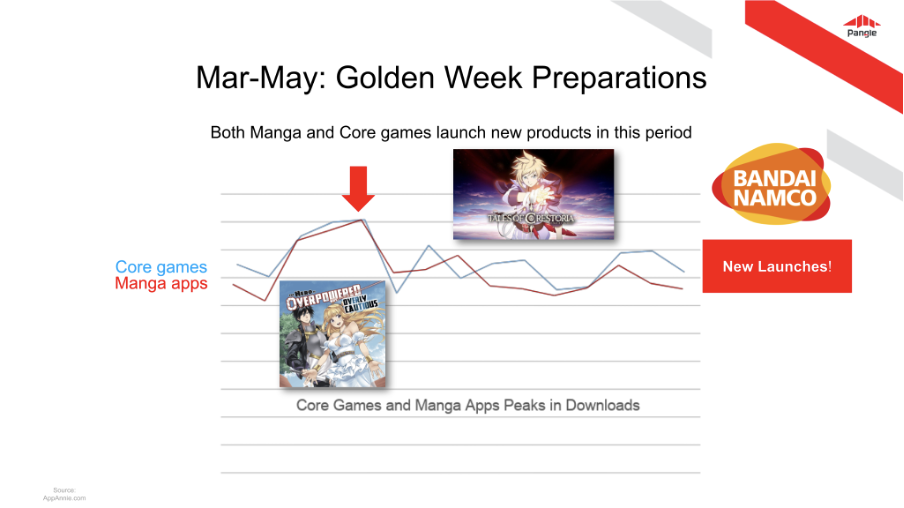 Obon is a traditional week-long Japanese holiday where people take time off work and school to travel back to their hometowns and celebrate with friends and family. Often they will leave behind their consoles and PCs. This results in increased time spent with mobile devices, and it's common for games to launch holiday-themed events and sales. Also, around mid-June, most companies will have handed out a bonus salary to their employees, giving people extra funds to utilize during Obon (Omotenashi). In other words, it is the perfect time for app developers to encourage people to download their apps. Multiplayer games will often see especially large sales increases during this period.

Despite Christmas not being an official holiday in Japan, it has become one of the most important dates for app developers to increase their revenue. Compared with other holidays, families with kids are spending a lot more money on games around the Christmas holiday (Yahoo).

Korea is famous for its large MMORPG market, and seasonal in-game events are a big driver of revenue. Growth is especially significant during holiday periods. The mobile game market has expanded rapidly in recent years, overtaking PC and consoles combined since 2017 (Yahoo). In 2019, mobile games led the gaming industry with sales revenue of around 7.7 trillion South Korean won, or about 6.8 billion USD (Statista). 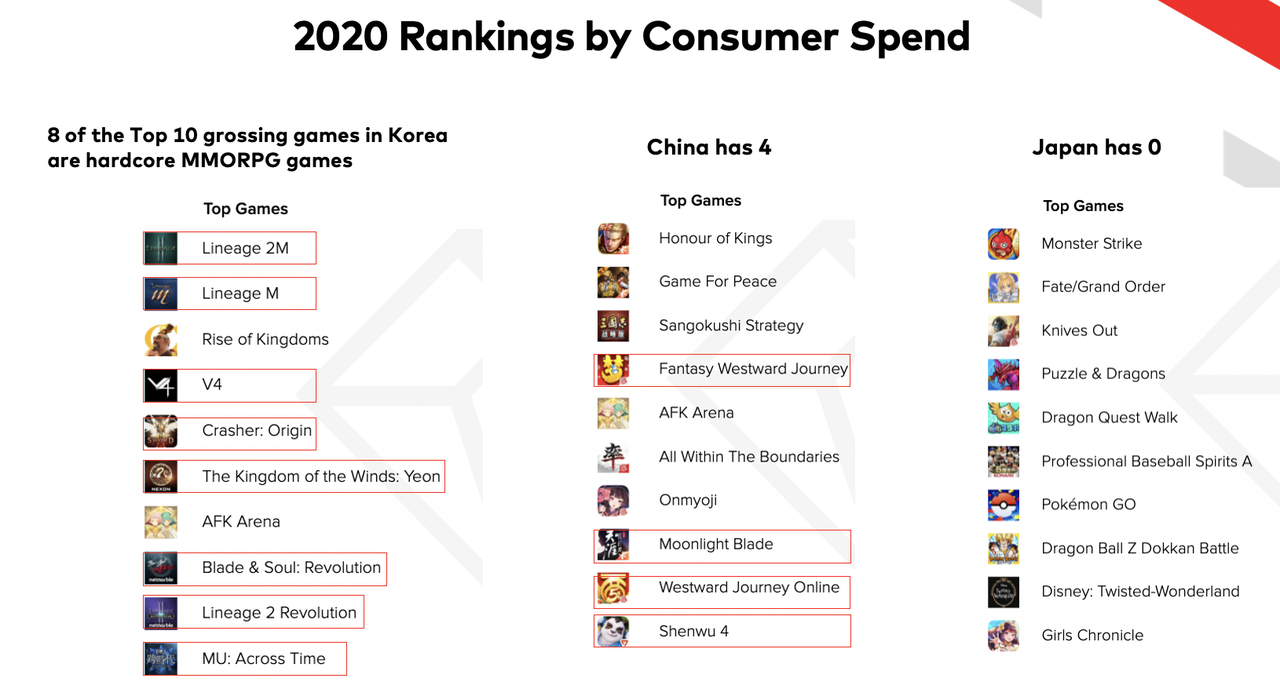 Where holidays are just as important in the virtual world

Many of these mobile MMORPG will tie in-game events with holidays occurring in the real world. These events will typically feature time-limited items or quests that reflect the spirit of the holiday, letting players celebrate time-honored traditions with their distant friends and communities.

The reason behind the importance of such events lies in the amount of revenue obtainable through these live-ops, greatly increasing ARPU (Average Revenue Per User) for mobile games in the country. 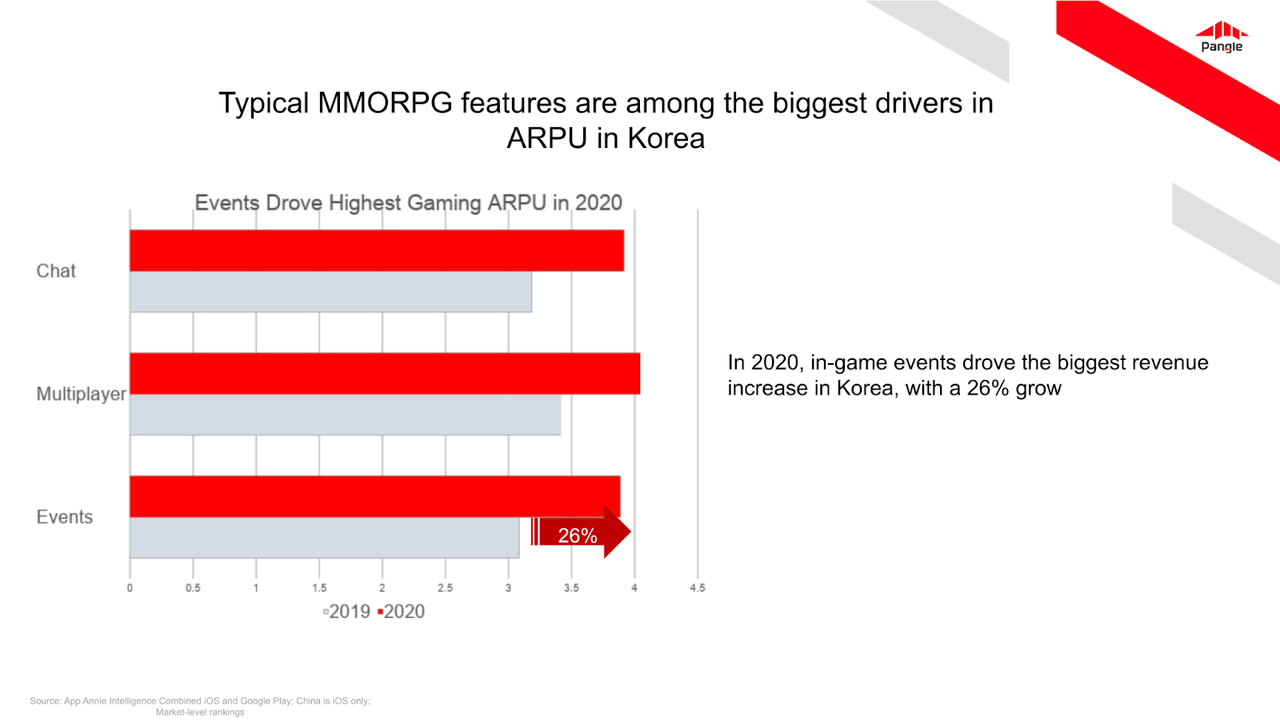 Christmas and Global New Year periods are packed with all kinds of in-game events, which vastly increase revenue by bringing in players who don't want to miss time-limited events and merchandise. The Korean New Year, which begins from late January to late February and lasts about three days, is another excellent time for adding holiday-related events and in-game items.

Korean college students have a total of roughly four months to rest every year. The summer holiday begins in mid-June and ends in mid-August. The Winter holiday starts in late December and ends in late February. This is a period of increased activity from students, who reconnect with their favorite apps, and it is typically a chance to see positive results with an increase in ad spend. A word of caution, the inverse is true for spring and fall, as students will be resuming their academics and focusing on studying. With the exception of Chuseok. 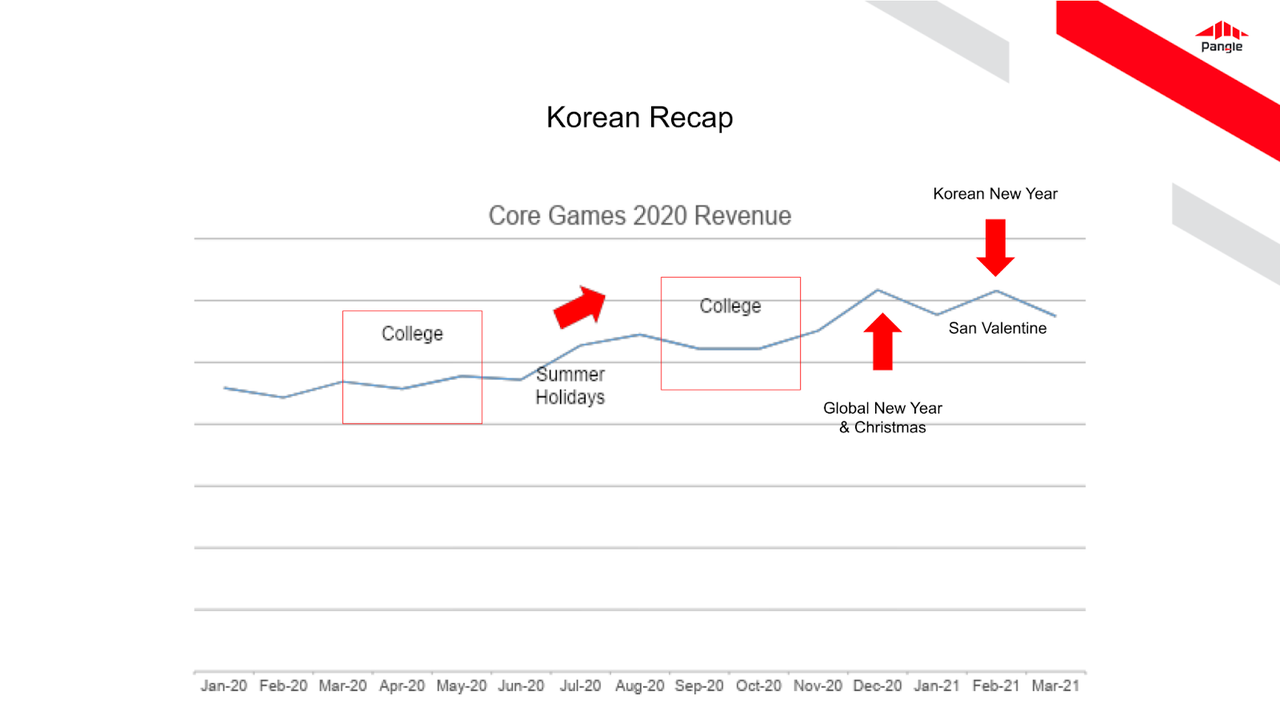 Also known as the Korean harvest festival, Chuseok usually starts in mid-September and lasts about three days. It is the most important festival in Korea, and usually the longest extended work holiday throughout the year. Many return to their hometowns, and will often spend more time on their phones to keep in touch with friends and take a break from the family. During this period, online games are packed with Chuseok-related events. Many companies offer discounts and sales to show their gratitude to customers, and customers respond in kind with increased consumption (Naver).

With well established traditions and seasonal time frames the game industry has been able to capitalize on the waves of sales within certain countries. But what of the newest region? The fastest growing region of Southeast Asia is coming. In part 3 of our Seasonal Differences series, we'll guide you through this growing market, and help you to pioneer new gaming trends within the region.

Boost your holiday opportunities with Pangle

Pangle already provides services to top performing gaming apps in both Japan and Korea. By leveraging our exclusive access to the TikTok For Business ad demand, Pangle enables global app developers to maximize earnings, and advertisers to reach out to a massive audience.

Contact us at pangle_support@bytedance.com and let Pangle help you reach your goals in Japan, Korea, and other Asian Pacific countries!