For developers looking to monetize their apps, in-app advertising is perhaps the most effective method. Often paired with other monetization strategies to form a hybrid approach (think freemium + ads, subscription + ads, or paid downloads + ads), in-app advertisements are used by over 38% of apps globally.

Put simply, in-app advertising refers to any form of advertisement that appears within a mobile app itself, rather than on a website or other platform. Given that the number of smartphone users has doubled since 2016 to a staggering 6.378 billion in 2021 and we re now spending, on average, 3 hours and 43 minutes on our phones each day, there s a near-infinite reach and potential customer base out there to tap into. But unfortunately for those who want to make money from their mobile creations, the question of in-app advertising requires more than a "yes" or "no" answer. To successfully monetize your app you need to consider what type of advertising best suits your app, how to interpret the results you re getting, and much more in order to successfully monetize your app. But before we delve into the specifics of in-app advertising strategies, let s take a closer look at how the system operates.

How do in-app advertisements work?

In-app advertising works on the principle that advertisers (those that want to advertise a product or service) collaborate with a publisher (those with the app and on-screen inventories). The advertiser pays for each click on the ad, which appears inside the app.

To bring these two groups together, an ad network or platform acts as an intermediary. Through a real-time bidding system, advertisers will pay for their advertisement to show up inside an app, whose developers will get paid for offering screen space in their app to show said advertisements. In this sense, ad networks like Pangle facilitate the entire process and offer a range of different ad formats for both advertisers and publishers to play around with, seeing which benefit them the most.

For the advertiser, success would be measured based on objectives like brand awareness, conversions, or ROI whereas, for publishers, success is primarily measured in finding the balance between earning ad revenue and still offering an app with a fluid user experience that promotes growth.

Why is in-app ads such a popular mobile app monetizing strategy?

No matter what type of product or service you offer, you should always get paid for it: the same is true for app developers.

"Freemium" as a business model is nothing new - but it certainly has become the go-to monetization strategy for app developers in the smartphone era. The reason for this is because the freemium model allows developers to earn money without thwarting growth. To do this, freemium apps often use a combination of in-app advertisements and subscriptions as a hybrid model in order to maximize their revenue whilst satisfying growth needs. In effect, a free app is far more likely to be downloaded by a bigger portion of users, therefore maximizing their growth. With this huge userbase, they can start to show ads and earn revenue. If the user gets fed up seeing advertisements and enjoys using the app (which they ve had plenty of time to test and play around with given it is free), they can pay a monthly subscription for an ad-free interface.

Comparatively, other monetization methods like in-app purchases can leave users dissatisfied with the experience of using the app. Locking parts of the app behind paywalls is often seen as a more aggressive monetization strategy, preying on addictive personalities - especially in the mobile gaming industry. 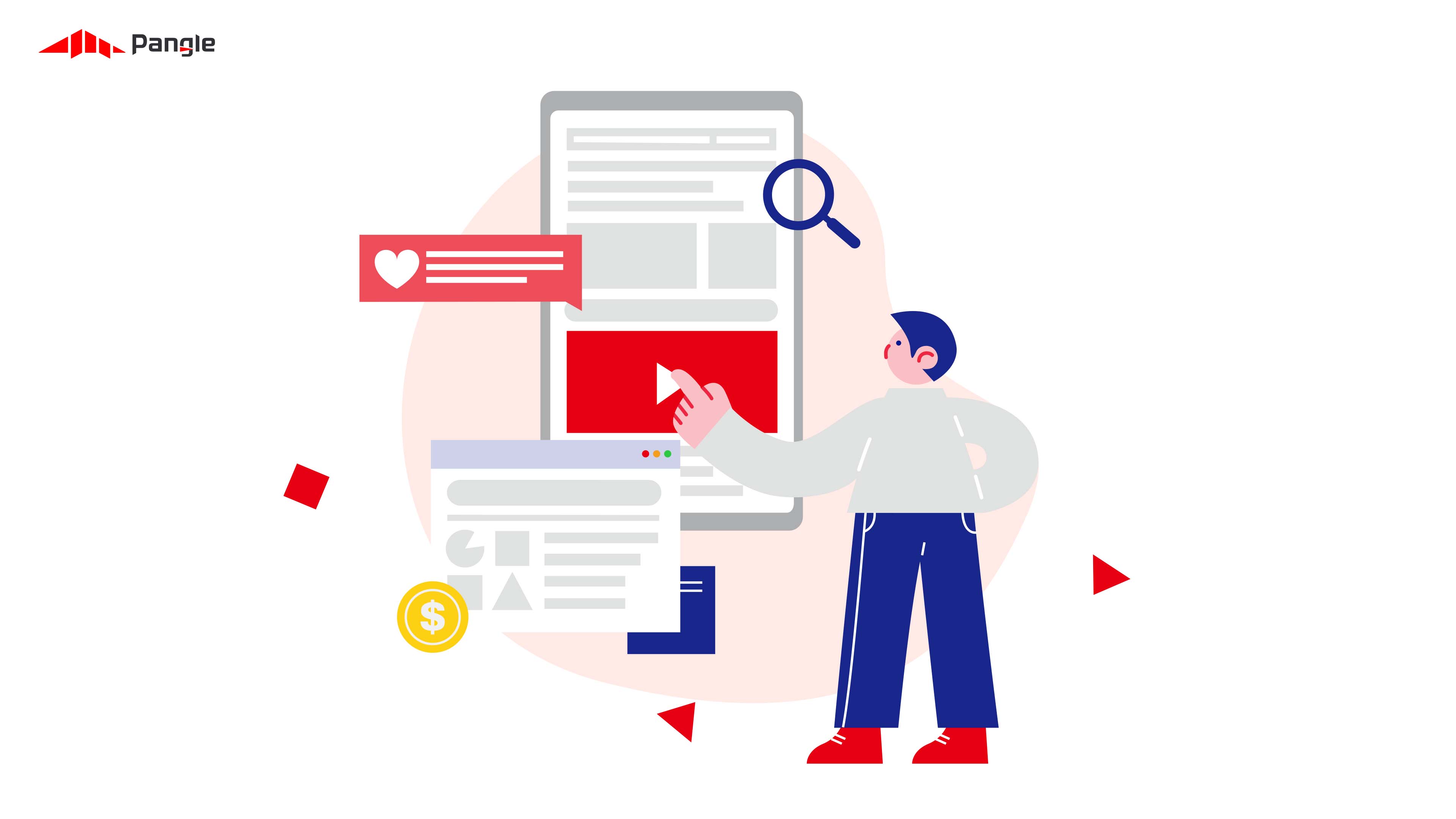 Click-through-rate (CTR) is the number of people who click on an advertisement or link over the total number of impressions.

Cost-per-mille (CPM) is the cost an advertiser pays for every thousand impressions.

Conversion rate is the percentage of visitors who take some action after seeing the in-app advertisement, such as clicking on it and then buying, signing up for, or downloading the product or service.

Real-time bidding is a process whereby publishers can sell ad space within their app to advertisers. Competition and other factors will influence the bidding price.

An ad impression is an instance in which a user sees an advertisement on a website.

Cost per action (CPA), cost per view, and cost per install, are all metrics used in marketing that measures the average amount spent on advertising for each desired result.

What type of in-app advertisements are there?

There are several different types of in-app advertisements that developers can run through their apps with varying costs. Each has pros and cons, and the right one for your app will ultimately depend on its nature and unique case.

In-app rewarded video ads give users the chance to either skip it or watch it for some reward. These rewards can vary based on the nature of the app but are most commonly some form of credit that can be used to redeem additional content.

They are more commonly used in the mobile gaming industry because there are often in-game currencies or extra lives that can be traded for watching an advertisement. As an in-app ad format, rewarded video ads are very popular and highly engaging, meaning they benefit all three parties: the app developer, advertiser, and user. Rewarded video ads also help maintain a high user retention rate, and do not significantly hinder the growth of the app - but at the same time do not offer the highest eCPMs.

Interstitial video ads with Pangle are full-screen, highly engaging and seamless in-app video ads interspaced within the user experience. While they do offer high engagement, click-through and conversion rates, they do somewhat disrupt the user experience in a way that native, banner, or even rewarded video ads might not.

Advertisers are more likely to benefit from a larger and more imposing ad that takes up the entire screen and will pay more, but app developers need to weigh up this benefit with the chance of reduced user retention. For this reason, interstitial video ads are most beneficial for mobile apps with linear user experience designs and clear, natural break points to minimize the ad s disruption.

The goal of in-app native ads is to place advertising content in and amongst organic content in your app. While still clearly labeled as sponsored content, native ads do not disrupt user experience in any significant way and still manage to maintain high click-through rates. In fact, two-thirds of the younger generation - which may or may not be your app s target audience - prefer content with native ads as opposed to alternative methods.

Not all types of apps will benefit from native ads, however, as they are most suited to apps with dynamic content such as forums, news apps, and other content aggregators.

Native ads can through the Pangle network be text, image, and video, and are easily modified to fit the theme and appearance of your app.

In-app banner ads are one of the most classic formats of mobile advertising. They allow app developers to section portions of their app s screen real-estate out for advertisements. Advertisers can place an image of their choice as well as short taglines which try to convince the user to click. This is the main difference between native and banner ads.

Regardless, in-app banner ads are an effective way to kickstart your mobile advertising strategy, as they offer sizeable levels of engagement without hindering the user experience of your app to any significant extent.

Don t hesitate to get in touch with a member of our team today by sending us an email at pangle_support@bytedance.com. You can also get a bounty of information all about in-app advertisement strategies and more in our resource center.