We re now at a point where mobile apps are a cornerstone of our daily lives. Everything from social media to mobile games, editing apps, and more are used on a daily basis for just about anything - and everything. In fact, we re spending an average of 4.2 hours per day using apps on our mobile phones, which makes up a staggering 90% of the time we spend on them in total. Compared to 2019, this shows a 30% increase - which is perhaps unsurprising given the impacts of the recent pandemic with successive lockdowns around the globe.

For app developers, monetization is perhaps the most crucial step towards an app’s success. Often, it s what separates the truly successful apps from the rest; what gives the developers the payday required to continue developing the app or spend time on a new one.

At its core, app monetization refers to the practice of charging users for using an application. But monetizing your app isn t as simple as asking people pay for it. This can be done in various ways, sometimes even combining different strategies to develop a solution that allows you to earn money from your app without hindering its growth, potential userbase, and usability.

This guide will go into depth about 4 different mobile app monetization strategies you should take, as well as their pros and cons.

One of the most simple and straightforward way of monetizing your app is the pay-per-download model. In short, this is when developers list their app on the app store for a sum of money. This is a one-time purchase that customers make when downloading the app, and from then on can use its full contents indefinitely.

The main advantage of this model is the fact that developers have complete control over the price of their app, and they never have to worry about users cancelling their subscriptions.

However, pay-per-download models will not provide a steady stream of income unless there are new users downloading the app, meaning as a developer, you are highly reliant on consistent growth. On top of this, the majority of mobile app users are hesitant to download paid apps in the first place. As it stands, 96.9% of apps in the Google Play store are free, and a similar 93.6% are in the Apple App Store.

Another point to note is that all the Apple, Google, and Samsung app stores will charge a 30% commission on all app sales.

The subscription-based model is a direct counterpart to the pay-per-download strategy. In this case, your users need not pay any upfront investment for the use of your app but rather a monthly (or yearly) subscription for it. With the app being free to download, developers will make a portion of their app free, giving users the chance to play around with the app before committing to any financial purchase.

Two of the main advantages of the subscription-based model include a steady stream of income from active users even if growth is slow and there being less barriers for users to initially download your app. Think of Spotify as an example of one of the most successful subscription-based apps used by millions around the world.

However, like pay-per-download apps, platform commissions for these hit 30%, or 15% if you are a smaller developer.

Many apps with in-app purchases are otherwise free apps. They allow users to use the app and get invested into the ecosystem before deciding if they want to make additional purchases or not. One of the main benefits of this strategy is that there is no hard-capped limit as to how much your users can spend on your app. Should they want to continually buy more content, they are free to do so - but this will also come at a cost as in-app purchases are often viewed in a slightly negative light.

In-app advertising works based on a real-time bidding system whereby advertisers and publishers communicate through a platform. Ad requests and bid requests are facilitated to get competitively priced ads running in apps.

One of the best tips app developers can be given when it comes to app monetization is to have a clear understanding of their audience and the way their app is used. This is because there are several different monetization strategies and ad formats available to developers, each with their own pros and cons. Running an app allows you to have a clear picture of how your userbase behaves, and therefore very targeted ads that have a higher ROI. 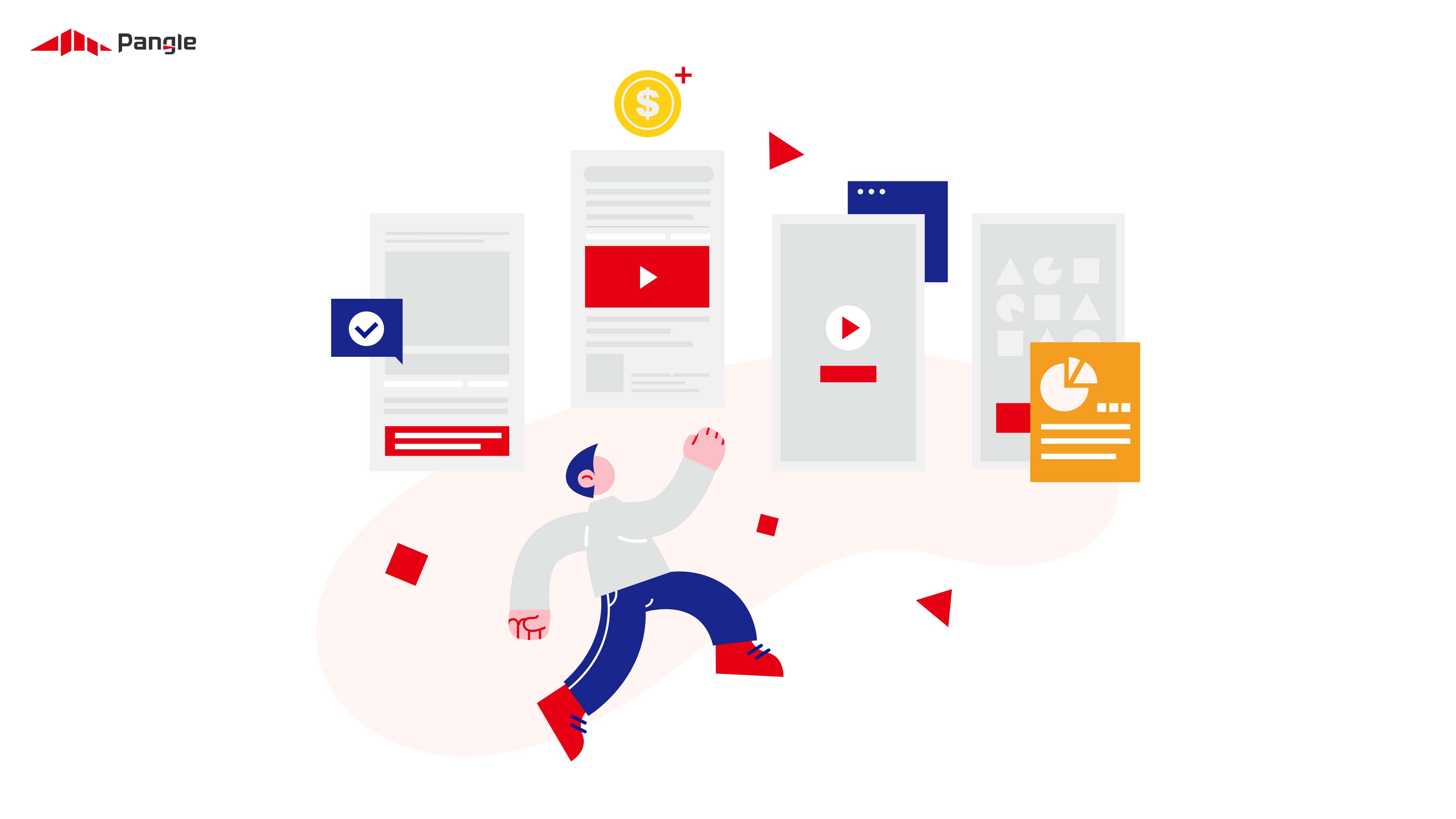 - This type of ad gives users the option to watch an ad for in-app rewards and incentives (like an extra life or in-game currency).

- They are extremely engaging

- Can be video ads or playable (interactive) ads

- These are video ads that appear at natural break points in the content.

- They are designed to be immersive, rich, and dynamic

- They can be text, image, or video

- The publisher can choose what type of banner ads are shown

Countless app developers have worked with Pangle to successfully monetize their app with in-app advertising. App-CM, for example, was able to greatly increase their app revenue without any significant impact on user experience, which was crucial to them. Read their story.

Rewarded video ads might work extremely well for a mobile game app, as players can win additional in-game content for watching an ad while the developer earns money and the advertiser spreads awareness: a win-win-win situation. Native ads, on the other hand, make a lot of sense for forum-style ads, as it doesn’t disrupt the flow of the app. With a platform like Pangle, it’s easy to maximize the eCPM (cost per mille) or revenue you earn from running advertisements in your app.

With over 276 billion USD spent on in-app advertising globally and an expected 494 billion by 2024, it’s clear that this is the path many app developers are taking through 2021 when it comes to mobile app monetization formats. In-app advertising allows developers to earn a consistent stream of money from their app without hindering its growth.

Visit our resource page for more information when it comes to app monetization strategies. Have any questions? Send us an email at pangle_support@bytedance.com.