Pangle and Newzoo jointly develop a series of mobile game genre reports to better understand the differences between the Western and Eastern markets. In this reports, we look at the top-performing puzzle titles in the U.S., the U.K., Japan and South Korea and deep dive into the key differences of these titles in terms of game design, user acquisition, retention, and monetization strategies in the West vs. in the East. 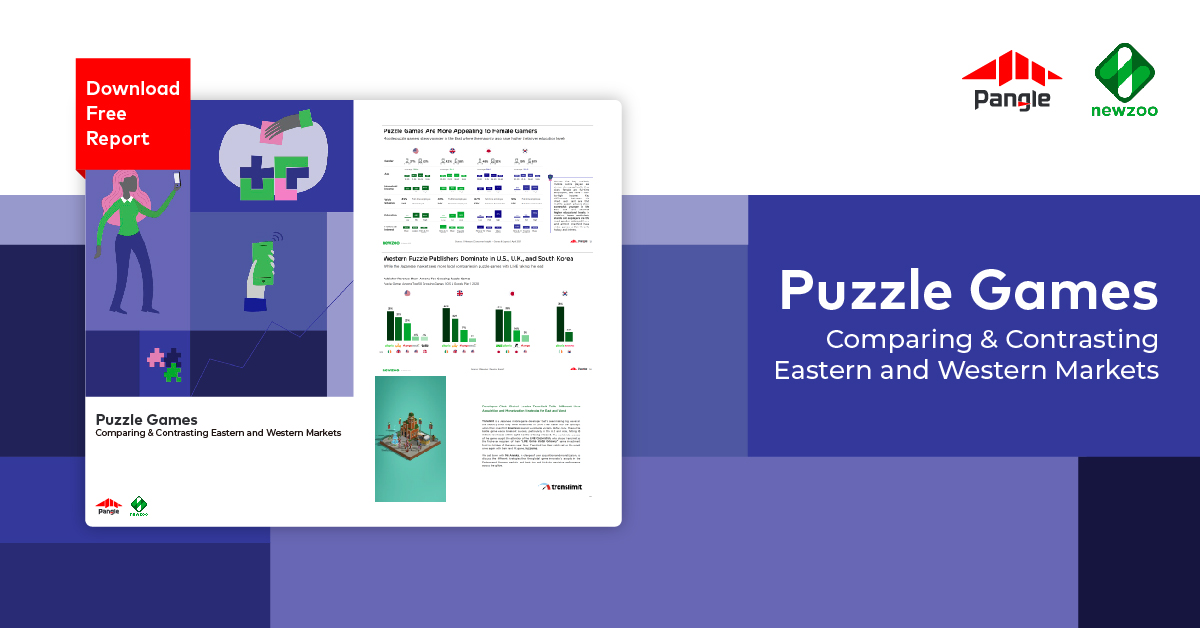 We compare the demographics and consumer preferences of puzzle game players in the four key markets. We hope that Pangle and Newzoo’s joint genre reports provide insightful information for game developers and publishers to understand the key differences in the Western and Eastern markets and to achieve global success.

Over the past forty years or so, the puzzle genre has evolved and found its home on mobile. The match-3 genre, which is the most popular puzzle genre on the platform, has spun out into various innovative subgenres, which we cover in the full report. And mobile players are happily engaging with and spending on the puzzle genre as a whole. To that end, puzzle games accounted for $6.9 billion in mobile game revenues in 2020 (via consumer spending, excluding ad revenues), representing 8% of last year’s $86.9 billion mobile game market.

Puzzle Game Consumer Insights: Mobile Players Are Most Likely to Have Played a Puzzle Game

We asked mobile gamers which genres they played on the platform in the past six months. Puzzle was the self-reported most-played genre for the U.S., U.K., Japan, and South Korea. We also compare and contrast other demographics for mobile puzzle players, including age, household income, work situation, education, and more. As you’ll discover in the full free report, the U.S., U.K, Japan, and South Korea share plenty of similarities but also some notable differences.

Finally, the report looks at the genre distribution across 2020’s top 50 highest-grossing titles on iOS and Google Play. Puzzle games account for a significant number of top-grossing titles in the West (e.g., U.K. and U.S.) while in South Korea and Japan, role-playing games are more dominant. Download the free report for contextual insights about publisher revenue shares for top games—as well as a deeper look at everything covered in this article.